We’ll sail out of Dunmanus Bay and explore Bantry and Roaring Water Bay’s. Ports of call could include Glengarriff, Bere Island, Crookhaven, Schull, Sherkin Island and Baltimore Harbour. The three bays offer different views and sailing experiences which you will enjoy.

Bantry Bay is large natural Bay, with one of the longest inlets in southwest Ireland, bordered on the north by Beara Peninsula, which separates Bantry Bay from Kenmare Bay. The southern boundary is the Sheep’s Head peninsula which separates Bantry Bay from Dunmanus Bay. The main islands in the bay are Bere Island and Whiddy Island. Bere Island is located near the entrance to the bay on the north side, close to the main fishing port of Castletown Bearhaven. The town of Rerrin is the largest settlement on Bere Island where Lawrence Cove marina is situated.

Roaringwater Bay is located in the extreme south west of Ireland and derives its name from the sound of the waters, powered by Atlantic gales, crashing against the numerous rocks and islands. Bordered by the Mizen Peninsula to the north and exposed to the Atlantic to the south it is influenced by the Gulf Stream the climate making the area moist and mild. There are regular sightings of cetaceans including harbour porpoises, dolphins and whales. The main inhabited islands are Cape Clear, Sherkin, Heir and Long Island which enjoy a vibrant community life all year round.

Roaringwater Bay, also known as Carbery 100 Isles, contains various terrestrial and marine habitats. Five of these habitats are protected because of their importance at a European level. The protected marine habitats are the large shallow inlets and bays, the marine caves and the terrestrial habitats under protection are the heath and sea cliffs. The entire area is considered as a Special Area of Conservation, which gives the bay additional protection.

With luck, you’ll see local dolphins, minkie whales, sunfish and leatherback sea turtles while we’re cruising in style, so have your cameras ready!

Book now to secure your place! 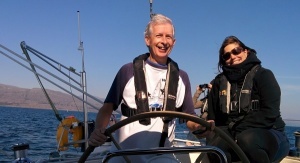 Taste the salt air on a Wild Atlantic Way Cruise Experience and immerse yourself ir the drama and beauty of Ireland’s Wild Atlantic Way! A day sail experience or a half-day tour on West Cork’s pristine bays will revolutionise the way you see Ireland’s rugged coastline. Dolphins and Islands Join us on our luxury Hallberg-Rassy […]