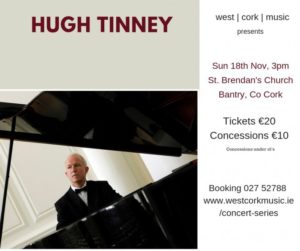 See Hugh Tinney in concert as one of Ireland’s most popular pianists celebrates his 60th birthday in November with a concert in St. Brendan’s Church, Bantry

The concert is a must for anyone who enjoys the wonderful programmes put together by West Cork Music each year for the West Cork Chamber Music Festival. The programme will include:

This is what Hugh has to say about this 12-date nationwide tour, which arrives in Bantry on 18th November:

‘I am absolutely delighted to have this opportunity to tour so many venues around Ireland as I approach my 60th Birthday this November. The programme brings together core piano composers – Beethoven, Chopin and Schubert – with two outstanding present-day composers, Belfast-born Ian Wilson and the internationally-celebrated British composer Thomas Adès. The programme’s balance of ‘old and new’ is united by a strong thread of human emotion in the face of life’s joys and sorrows. Dark musings of Wilson on Christ’s trials and of Adès on Dowland’s celebrated lute song on spiritual ‘Darknesse’ are balanced against mainly joyous mature works of Beethoven and Chopin, culminating in Schubert’s iconic final Sonata which balances light and dark before strongly asserting joy in its final two movements.

Dublin pianist Hugh Tinney ended the Great Music in Irish Houses Festival on Sunday at the Rotunda Pillar Room with a preview of the 60th-birthday programme he will tour next November. He was in commanding, ruminative form in music that ranged through Beethoven, Ian Wilson and Chopin and he ended with a time-stilling account of Schubert’s late Sonata in B flat, D960.
Michael Dervan, Irish Times 20/06/2018

Mason’s Cottage is a spectacular holiday home with sea views, located on its own private landscaped grounds just outside Kilcrohane on the Sheep’s Head peninsula. This is a bright sunny welcoming holiday base, perfect for families, and tastefully furnished to a very high standard. Two miles from Kilcrohane village, and sixteen miles from the […]