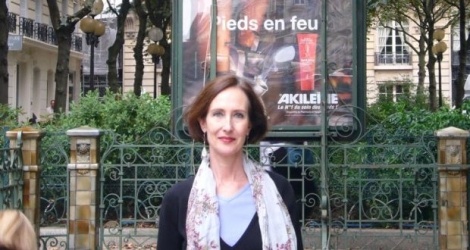 Explore the basic skills of writing and filing a newspaper story with Lara Marlowe!

Veteran foreign correspondent Lara Marlowe will teach a three-day journalism seminar in which she will describe her own experiences and offer advice for hard news, war, disaster, terrorist attacks, political and cultural reporting, and writing opinion pieces. She has covered the following conflicts. (Several appear in her 2010 book The Things I’ve Seen; Nine Lives of a Foreign Correspondent): the Contra rebellion against the Sandinista government in Nicaragua in the early 1980s; the last years of the Lebanese civil war (1988-1990); the Algerian civil war of the 1990s; the disintegration of the former Yugoslavia, including conflicts in Croatia, Bosnia, Serbia and Kosovo from 1992 until 1999; flare-ups between Israel and Lebanon and Israel and the Palestinians over the last three decades; Afghanistan following the 9/11 attacks in 2001; the 2003 invasion of Iraq and the Sunni-Shia civil war that followed; the Russian invasion of south Ossetia and northern Georgia in 2008; the Central African Republic in 2014. She has also covered major disasters, including the 1997 Concorde crash and the 2015 Germanwings crash, the 2010 earthquake in Haiti and the wave of terrorist attacks that struck France in 2015-2016.

Lara will also talk about the personalities and forces at play in French politics since 1996, including the 2017 presidential election. She witnessed the first administration of Barack Obama at close hand, and covered the 2012 US presidential election. She has also addressed wider political issues such as globalisation, climate change, the Sunni-Shia divide and the jihadist threat.

Lara has done a great deal of cultural reporting, some of which appears in her 2011 book Painted with Words. She will talk about the pleasures and challenges of interviewing artists, actors and musicians, and covering major exhibitions.

-Addressing the changing status of the profession in the digital age
-Merits of television, radio and print journalism
-How to become a freelance or staff correspondent
-The basic skills of writing and filing a newspaper story

Lara Marlowe is a Paris-based foreign correspondent for The Irish Times newspaper. She has written extensively on the rise of Islamic State, and covered jihadist attacks in Paris and Tunisia in 2015. As a journalist for more than three decades, she has lived in Paris, the Middle East and Washington DC, where she covered Barack Obama’s first term in office. Lara holds degrees from UCLA, the Sorbonne and Oxford, and has won three press awards. She is the author of The Things I’ve Seen; Nine Lives of a Foreign Correspondent, and Painted With Words. The French government made her a Chevalier de la Légion d’honneur for her contribution to Franco-Irish relations.

Class will be held daily from 9:30am – 12:30pm in the Coláiste Pobail Bheanntraí (Bantry Community College).

It is recommended that all participants bring a laptop/tablet with them to the course and also that they read these two books in advance – The Things I’ve Seen: Nine Lives of a Foreign Correspondent by Lara Marlowe and Ryszard Kapuscinski’s Imperium (both titles should be available from your local library or bookshop).

Located on the beautiful award winning Sheep’s Head peninsula in West Cork, Carbery Cottage Guest Lodge B&B accommodation is ideally situated for that relaxing break away Guests are charmed by the beautiful location, the friendly proprietors, and the wonderful breakfasts at this lovely Sheep’s Head B&B. Mike and Julia are happy to provide excellent evening […]