A local committee was formed, under the guidance of Tom Whitty and James O’Mahony, a local farmer. Due to trojan work of this committee, the walk was researched and developed and put in place within 18 months. In july 1996, Mary Robinson (then President) officially opened the walk gaining an “All Ireland Award” for development and quality techniques.

Unfortunately, Tom’s accidental death in July 1998 has robbed the Sheep’s Head community of this inspiring community leader. Tom’s academic skills and his humanity, his interest in future development of the Sheep’s Head Peninsula and his commitment made him unique and will always be remembered.

Tom will forever be remembered by the memorial ‘Atha Thomais’ at Gorteanish, Ahakista.

Registration from 11.30am at The Cabin (next to Arundels) Choice of 2 routes to suit ability, approx 2-3 hours. Refreshments provided in The Cabin at the finish. No charge – donations accepted. 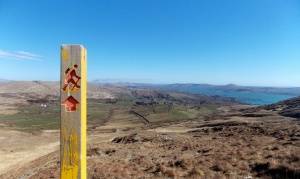