West Cork’s Sheep’s Head Way made its presence felt at the inaugural Irish Tourism Industry Awards with a string of special accolades going to members of its tourism co-operative.

The national awards were presented in twelve categories, and Guinness topped the Best Leisure Tourism Innovation category in which the Sheep’s Head’s & Bantry Tourism Co-operative was shortlisted. However, the judges – including travel journalist Pól Ó Conghaile and representatives of Primark and Google – went on to award one of just three special judges citations to the co-op for its outstanding work on its “Living the Sheep’s Head Way” promotional campaign.

The co-op represents almost 100 tourism-focused businesses along the 88km Sheep’s Head Way walking route which runs from the historic harbour town of Bantry out to the tip of West Cork’s Sheep’s Head peninsula, and then back inland towards Gougane Barra. ‘It’s really wonderful to have the hard work of the co-op and its members acknowledged in a competition where we were up against over 330 of the country’s finest tourism initiatives,’ said co-op chair John Tobin. ‘A further two co-op businesses were also rewarded on the night which is fantastic for West Cork.’

David and Elizabeth Ross won a special judges citation for the Top of the Rock Pod Páirc & Walking Centre, their glamping site and walking business in Drimoleague. Meanwhile, a brand new West Cork business Shoeniversity won a bursary in recognition of the exciting work it is doing in offering shoemaking courses in the stunning setting of Bantry House.

‘Between us, we made quite an impression on the awards’ says Siobhán Burke, the co-op’s marketing co-ordinator. ‘And we were delighted to accept the accolade on behalf of the Sheep’s Head Way, not least because it is a huge tribute to what was achieved by the walk’s founders and the landowners who supported them when the Sheep’s Head Way was created in the late 1990s.’

‘The late Tom Whitty, along with Jim Leonard and James O’Mahony, set us a powerful example of what can be achieved when people collaborate,’ she added. ‘Their imaginative, community-led approach was recognised when the Sheep’s Head was designated as a European Destination of Excellence for sustainable tourism in 2009, and everything we’re doing now continues to be inspired by their example.’

‘One of the great things about this latest award is that it shows that the kind of responsible tourism represented by the Sheep’s Head Way is great tourism by any standards.’

‘Our members are investing a huge amount of time and effort into making the area a landmark destination on the remarkable Wild Atlantic Way, and with the boost we’ve had from this award, we’re looking forward to a very successful summer.’

The award is yet another accolade for ‘Living the Sheep’s Head Way’, which has been supported by both the West Cork Development Partnership and Cork County Council. The Sheep’s Head won Silver in the ‘Best Responsible Destination’ category at the Irish Responsible Tourism Awards in March, and was also named as ‘Best Destination of the Year’ by the prestigious John and Sally McKenna Guides this January. 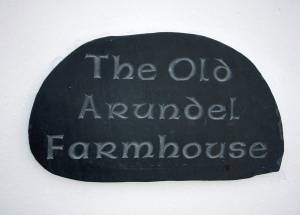 Learn traditional letter-carving skills under the tuition of an experienced stonecarver on West Cork’s Sheep’s Head peninsula. Victor Daly leads regular letter-cutting and stone-carving courses at his workshop just outside the village of Ahakista on the Sheep’s Head peninsula in West Cork. His 1-day letter-cutting courses are held throughout the year. Please get in touch […]