You are here: Home / Archives for Walking

Here at Hillside Walks in West Cork we will guide you on a West Cork hill-walking holiday along Ireland’s beautiful Atlantic coastline.

Take a guided walk along the Sheep’s Head Way with Hillside Walks and you’ll find out about the rich history of the Sheep’s Head peninsula as you explore a landscape marked with the traces of Ireland’s rich history. Take in the rugged beauty, and the fine views across the neighbouring West Cork peninsulas and islands. This unspoilt part of Ireland has been recognised as a European Destination of Excellence in recognition of its outstanding natural beauty.

Our tours with experienced walking guide Charlie McCarthy can also be arranged to include accommodation at Seamount Farm B&B. Scenically set with interesting gardens, Seamount Farm B&B is a restored 7th-generation Irish farmhouse with traditional stone farm buildings. It’s the ideal base for a hill walking holiday in Ireland. The house boasts magnificent views overlooking Bantry Bay and across to the Beara peninsula.

If you would like to stay in different B&Bs during your visit, we can save you the worry of sourcing accommodation and arrange this for you. Guided walks can be arranged for all visitors to West Cork.

Set out from Bantry town along small lanes and fields to the first ridge section on the Sheep’s Head peninsula, a European destination of excellence.

IV 99318 48463
The Sheep’s Head Way starts in Wolfe Tone Square, Bantry. With the square and the statue of St.Brendan the Navigator (Naomh Bréanainn) behind you, looking towards Bantry Bay, take the N71 road that runs along the south (left) side of the bay. On the right, at the start of the quay is the Sheep’s Head Way information board and map. Post 001 is attached to a telegraph pole. Opposite, next to the road by the Cinemax cinema is the gatehouse to Bantry House. Go through the gate and follow the drive up to the house.

IV 98387 48153
Between a boatyard and a previous gatehouse for Bantry House, turn left into the grounds of the West Lodge Hotel. Follow the path past the ponds and up through the grounds and exit by the main entrance in front of the hotel car park. Cross the busy main road, turn to the left and at marker 5 take the first turn on the right signed ‘Dromclogh’. Follow this small road and you will soon be away from the hustle and bustle of the town.

IV 96980 47366
Lady’s Well is still a place of local pilgrimage. From here follow the posts across the corner of a field and over a ladder stile onto a road. Follow this road to the T junction at 22 and turn left.

Turn up the small road which will take you steeply up round many sharp bends to the ridge. On the way take a look back as there are several ring forts to be seen and there are good views over Whiddy Island and Bantry Bay.

The route climbs up to the ridge of the peninsula, and rewards you as you walk with views over Kilcrohane, our West Cork bays, the Mizen and Beara peninsulas and the West Cork islands in Bantry and Roaringwater bays.

The chance to reward yourself with a fine feast, or a drink overlooking Kitchen Cove at Ahakista‘s Arundel’s By the Pier isn’t to be missed at the end of your journey. 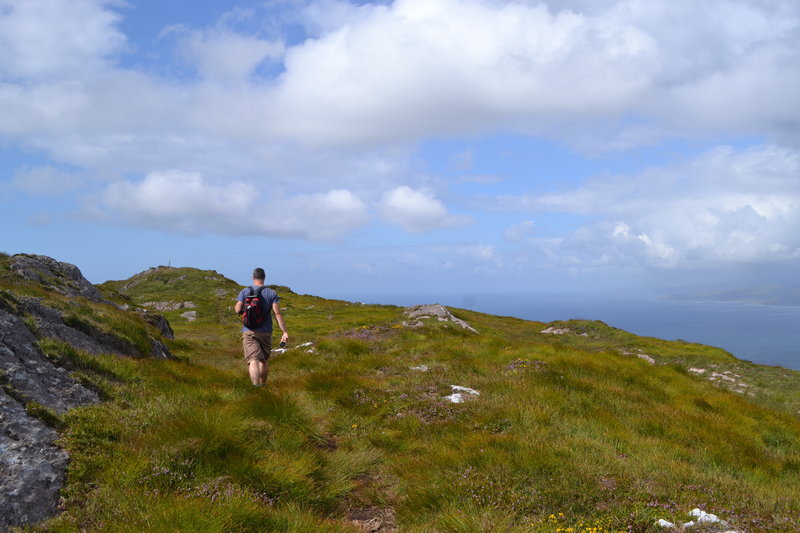 From the car park at Arundel’s by the Pier, take a right onto the public road and continue on until you arrive at a tee junction (Ahakista Bridge).

At The Windy Gap Junction sign (way marker no. 165) take the Seefin/Kilcrohane option keeping left in a southwesterly direction for the summit of Seefin. When you reach the top take a sharp left at the Trig Point/way marker no. 41.

You will eventually arrive onto a tarred road, passing by the Átha Thomáis memorial em route to the main public road. This will lead you back to Ahakista bridge and the car park at Arundel’s by the Pier.

From the car park at Dún Óir on the north side of the peninsula, go over the timber stile way marker, Christian Cross no. 1. Follow the Mass Path way markers uphill until you reach The Mass Path Junction sign/ way marker no. 151.

From the car park at the Black Gate and Alice West Centre past the village of Kilcrohane, follow the purple loop walk arrows for the Cahergal Loop Walk in a northeasterly direction along the public road for a short distance.

At way marker no. 3 (Peakeen, Cahergal and Caher), turn left off the public road. Continue up the track and onto the hill going through 4 stiles en-route until you reach way marker no. 15 (Peakeen and Cahir) and turn left.

Continue on, crossing the peninsula to the Bantry Bay side, until you reach the car park at Cahergal. Keep left after going over the timber stile and cross the road where you will go over another timber stile, passing way marker no. 206.

Continue straight on for the cove, passing the the ruins of a famine hamlet known locally as the “Crimea” and the abandoned copper mines, en route. At way marker no. 238, keep left and walk a short distance along the pubic road. Turn right at the finger post sign for “The Poet’s Way” and go off-road over a timber stile, at way marker no. 65 Poet’s Way/Cahergal. Follow the way markers to traverse the peninsula to the south side until you meet way marker no. 348.

Turn left here and continue straight on until way marker no. 354 and turn right. Continue on down to the public road and back to the Black Gate / Alice West Centre.

The Caher Loop Walk leads you up to the ridge of the Sheep’s Head peninsula, with fine views over Bantry Bay and Dunmanus Bay!

From the car park at the Black Gate / Alice West Centre just outside Kilcrohane village, follow the green loop walk arrows in a northeasterly direction along the public road for a short distance.

At way marker no. 3 (Peakeen, Cahergal and Cahir) turn left off the public road. Continue up the track and onto the hill going through 4 stiles en route until you reach way marker no. 17 marked Peakeen/Cahir.

Turn right down the hill beyond Cahir lake on an old road. When this road meets the public road turn left. Walk along the public road for a short distance then turning right downhill again onto “the stony roadeen” passing by a private garden.

At Trá Rúaim strand, veer right uphill on the public by-road and right again when this road meets the main public road to return to The Black Gate.

Pinewood Cottage is a 300-year-old traditional cottage that has been totally refurbished and now serves as a cosy and inviting self-catering home It is hidden in a quiet area near Bantry, County Cork and sits on its own grounds with a mature garden with a large lawn and beautiful views of Dunmanus Bay. The cottage’s […]