You are here: Home / Archives for News

If you would like links to the video recordings so you can catch up on the training sessions, email Siobhán on [email protected]

If you attended the training or watched the catch-up videos, please provide feedback using the form below.

A beautifully illustrated article documents the author’s visits to some of Ireland’s EDEN destinations – otherwise known as European Destinations of Excellence.

The Sheep’s Head was named as an EDEN destination for sustainable tourism in 2009 and, as the article shows, it remains an unspoilt gem on Ireland’s coastline to this day. The feature introduces its German audience to Dunbeacon Pottery, walks with David Ross from Top of the Rock Pod Pairc and the fun to be had with Bantry Bay Pony Trekking.

Bantry House looks simply stunning in the gorgeous photos that accompany the article, and there are lovely mentions for The Fish Kitchen, Blairscove House and Heron Gallery Café and Gardens. Of course, Durrus Cheese also wins a positive mention!

The author reserves special praise for the wonderful hospitality to be found at the award-winning Carbery Guest Lodge where the author was made very welcome. We hope the many readers of the magazine will consider making their own journeys to our beautiful part of the world to see for themselves why the Sheep’s Head is a little bit of EDEN right here on the Wild Atlantic Way.

Check out the article here

For generations, artists, makers, producers, and dreamers have been inspired by the stone that forms our peninsulas, islands, rolling hills, and valleys. Stone tells a story that unlocks the flavours, textures, landscapes, and creativity of our Wild Atlantic shoreline.

The West Cork Stone Symposium (March 23–25 2018) in Kilcrohane will be a hands-on, creative celebration of stonecraft, and it’s set to feature craft workshops, talks and tours against the backdrop of the rugged peninsulas and islands on Ireland’s southwest coastline. The symposium follows on from a hugely successful first run last year in Ahakista.

Visitors will be able to unleash their creativity as they learn from some of the world’s best dry stone wallers, carvers, and sculptors. Workshop-goers will work beside some of the most skilled craftspeople in Ireland as they begin to master ancient but timeless craft skills. The symposium’s workshops on dry stone walling and stone carving are open to people of all abilities. If you’re an absolute beginner or looking to improve your skills for a project of your own, head to West Cork’s Sheep’s Head peninsula on the Wild Atlantic Way for what’s sure to be a creative and collaborative weekend.

“We’re delighted to be passing on traditional skills”, says Victor Daly, a sculptor and stone carver who is the West Cork Stone Symposium’s creative director. “Dry stone walling and stone carving are really ancient crafts, and the work we do is so much part of the landscape of the west of Ireland that people almost see it as part of nature.”

“Dry stone walling and stone carving have helped to shape the identity of the Wild Atlantic Way, and they reflect the character and creativity of our communities too. We’re looking forward to welcoming people to our gathering so that they can immerse themselves in West Cork life and play a part in carrying ancient skills and traditions into the future.”

Visitors to the symposium are sure to draw inspiration at the bustling workshops from the rugged coastline of West Cork’s Sheep’s Head peninsula – a European Destination of Excellence that’s home to one of Ireland’s most creative communities. Don’t miss this chance to gain a unique insight into the environment and the creativity of the people who live here on the very edge of Europe.

To book workshops and find out more, visit http://westcorkstonesymposium.com

In 2016, Muintir Bháire Community Council engaged John Tierney of Eachtra Archaeological Projects to conduct a conservation plan for the remains and site of the O’Daly Bardic School in Dromnea, east of Kilcrohane village. They set about mapping the site of the school, and their work was funded by a Heritage Council grant, awarded to the Muintir Bháire Community Council.

The archaeologists mapped the structures at the site using a high-tech remote camera to produce 3D images. They also reviewed existing date and historical sources to assess how the site fits into local and national contexts. This research phase has made clear that the site is strongly linked to the story of the medieval Gaelic era before the Flight of the Earls.

John Tierney presented his research findings to a public meeting in Kilcrohane on 25th October, 2016, and you can listen to it here …

Archaeology.ie
Ordnance Survey of Ireland
https://www.irishgenealogy.ie/en/
johngrenham.com
historicgraves.com
This site shows how local graveyards have been mapped by local communities, helping locals and visitors to piece together stories about family history and the links between families and places.
Irish Folklore Project [Note: the interactive map here will only work if you are using the Internet Explorer browser]

An interest in making more of our local heritage sites is key to another local project which is gathering views on the future development of the Sheep’s Head Way walking route. We’d be very grateful if you’d consider filling in a form to share your views on what might be done in the years ahead!

Any decisions about the future and development of the walkways will of course be made by the Sheep’s Head Way Ltd. and its members in a democratic way. Quite simply, what we’re doing here is collecting evidence from as many interested parties as possible so that local views are considered at every stage of planning for the development of tourism along the Sheep’s Head Way in the years ahead.
.
The Sheep’s Head & Bantry Tourism Co-operative is delighted to help the O’Daly project by providing this information page which we’ll update regularly. To find out more about the tourism co-op, visit https://livingthesheepsheadway.com/join-the-sheeps-head-bantry-tourism-co-operative/ or contact Siobhán on 086 303 0991. 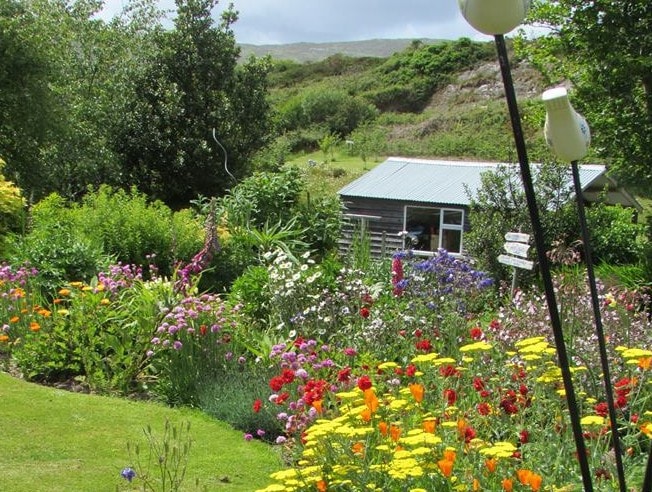 We’re able to grow an extraordinary range of plants by our Atlantic coastline thanks to the warmth the Gulf Stream brings. The lovely mild climate we experience all along the Sheep’s Head Way walking route – on the Sheep’s Head peninsula itself and in the more sheltered areas inland – is taken advantage of by our innovative gardeners.

They show great ingenuity, whether they’re working on grand estates or in smaller idylls, each with their own unique character. There are wonders to be found all along the Sheep’s Head Way for anyone with a passion for plants and the beautiful environment we’re blessed with here in West Cork.

Explore the terraced West Cork gardens at Bantry House, and climb the steps to look out across the house, its gorgeous grounds, and Bantry Bay. And call to meet the gardeners who bring extraordinary colour and variety to plots across West Cork’s Sheep’s Head peninsula at Ballinvillon, Ballycommane, Heron Gallery and Carraig Abhainn.

Visits to the lovely gardens on the Sheep’s Head peninsula are truly rewarding. And the tearoom at Bantry House and the café at Heron Gallery give you the perfect excuses to treat yourself while you’re on tour!

Our West Cork gardens are close to the mountain trails and cliff-top walks of the Sheep’s Head Way, and, while you’re visiting the area, you’ll enjoy the chance to see our creative craftspeople at work too. There’s creativity in evidence at every turn here, as you’ll soon see!

See the full list of our Sheep’s Head gardens here!

Explore even more West Cork gardens when you set out on the West Cork Garden Trail! 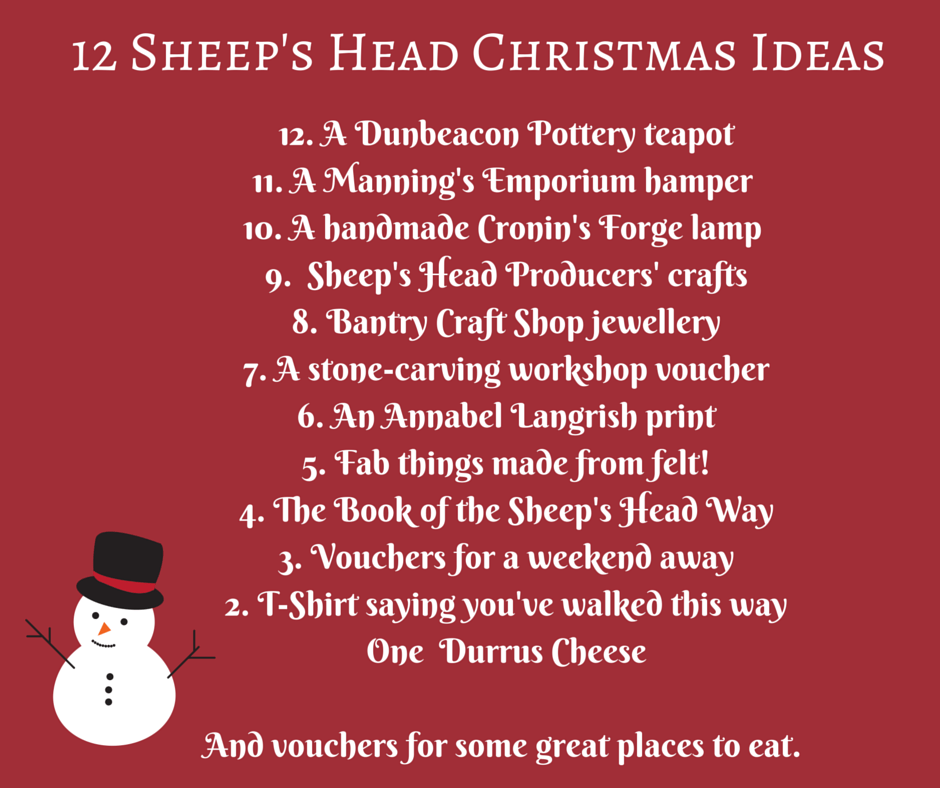 In a bid to help you put a bit of Sheep’s Head cheer into your Christmas, we’ve compiled a list of ideas for Christmas gifts with a Sheep’s Head twist!

And vouchers for some great places to eat.

This is so far from being an exhaustive list, but we hope we’ve sparked your imagination!

Vouchers for The Fish Kitchen, Arundel’s, The Old Creamery, or The Brick Oven make lovely presents. Special offers are available for stays at The Maritime, or The Westlodge, and a booking at one of the great places to stay along the Sheep’s Head Way is sure to bring a smile to the faces of your nearest and dearest well into 2016.

The promise of a commissioned painting from Danny Smith or Fiona Power would make a wonderful surprise on Christmas day too.

Wishing you and yours a wonderful Christmas from all of us here along the Sheep’s Head Way!

Bay View Cottages are centrally-located in the charming coastal village of Kilcrohane on the Sheep’s Head peninsula in West Cork Bay View cottages are three adjacent self-catering holiday cottages. Each one can accommodate up to six people, so the cluster of cottages in this lovely village is ideal for walking and diving groups, or any […]