This walk forms the last section of the Sheep’s Head Way route via Vaughan’s Pass and Bantry House. It leads you back to the centre of the historic market town of Bantry at the head of Bantry Bay

640
IV 99705 41642
From the Barnageehy parking area, go south along the main road and cross carefully to the smaller road signed ”Ballybane East’. Follow the road to post 642 (IW 00548 41801). From there, turn to the left towards a farm building. The road turns into a track and then a small road as it descends the hill.

656
IW 00914 44631
The path crosses the busy main road (R586) which runs from Bantry to Drimoleague. The path then begins to ascend towards Vaughan’s Pass. To the left, almost all of the Sheep’s Head peninsula can be seen.

660
IW 00784 45792
Between here and post 661, look to the right to see two large standing stones across a field. These are large stones and there are several others nearby and in the field walls. This was possibly a significant site.

662
IW 00594 46224
The area above the road was mined for Barytes and some of the workings can just be seen. Barytes is used in paint and paper-making. The mine closed in the early 20th century.

664
IW 00112 46870
After passing the communications masts, the road begins to descend and there is a parking area with panoramic views over Bantry town. The paths towards Drimoleague, Mealagh Valley, and Kealkill lead off to the east here. These paths form extension loops which bring the Sheep’s Head way out to Drimoleague, Carriganass Castle, and to the famous early Christian site at Gougane Barra.

If you are not walking the extension loops, follow the road downhill towards Bantry.

671
IV 99580 48170
After passing the hospital, turn sharp left at the junction into Scart Road. Stay on this road past the housing estates.

You are now in the grounds of Bantry House. Follow the beautiful path down to the house. (You can stop at the tea rooms if you are walking between Easter and the end of October). Keep the house on your left, passing the large glass doors to the library which is used for music performances, with the knot gardens and ‘Hundred Steps’ and stables to your right.

After the house, continue down the drive to the gatehouse. Pass through the arch, turn right and your are back in Wolfe Tone Square. Buy an ice cream, a pint or a cuppa – you deserve it!

Your have reached the end of the Sheep’s Head Way! 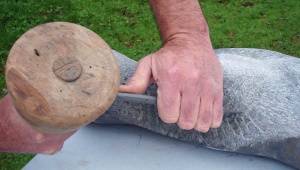